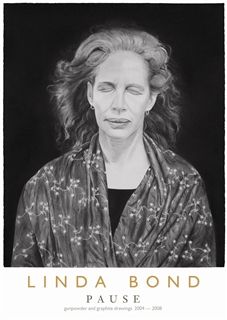 Complexities of Social Justice
Part I

Linda Bond—Pause
Among many other Cambridge School of Weston’s efforts, the Thompson Gallery has scheduled three exhibitions this year that will add to if not sharpen our exploration of the theme of social justice. This coincides with one of the most important and historical presidential elections in decades, which has famously implored the need for change. Within this context, we are pleased to present Linda Bond: Pause—Gunpowder and Graphite Drawings from 2004-2008. Here is an assembly of small to monumental drawings made with conceptually potent materials depicting weapons, key political players, and portraits of the first casualties of the conflict in Iraq.
Linda Bond is an artist with exceptional skills at portraying illusionistic likenesses on two-dimensional surfaces. Bond is a true master of naturalism. This body of work is from an ongoing series the artist loosely calls Natural and Manmade Disasters. As an avid reader, Bond has been actively collecting newspaper imagery for years, amassing a large collection of clippings, which she has organized into a library of folders that inform and inspire her series of life-like depictions. To appreciate her work only on its representational merits alone, however, would be to largely miss the essence of her work. To be sure, Bond is a master of filling in the missing bits of information from the pixilated pictures with which she works, but her ability to collect, select and juxtapose her imagery deepens the meaning of her work in profound ways. Moreover, there is a particular reserve in her approach to creating her art that makes the work powerful, iconic and haunting. When asked about the overarching themes of her series and how she makes them, Bond points to issues of empathy and respect.

I try to find equanimity and empathy and instead of seeing the differences and the conflict or the problems with people, I tried to find compassion for these things and try to understand. I try to see people who see differently than I do and I try to find humanity there. It is easy to demonize someone who you totally disagree with, but I have found that you can have compassion for these individuals and find humanity in these individuals, too.

What is literally arresting about the work is the way in which each portrait is made to somehow emanate patience, regard and grace in the face of blatant strife and conflict. As audience of this work, despite our assumptions and ideas about various cultures, people and the political ideologies that are collectively represented, we ultimately realize the complexity of our global conflict as being too great and that the truths are so divided that to definitively declare one answer right over another is not an easy task. At a time when our economy is in turmoil, and consumerism has had an impact on the sublime climate change, Pause confronts its viewers with the complexities of America’s War on Terrorism without blatantly taking sides. With its apparent neutral stance, Pause spurs many questions about notions of truth, justice and the American Way.
Can the viewer find patience and compassion in each of the images gathered in this room? Can the viewer find fear and anger for each of the images in this room? These are just two simple questions to consider in the face of a multitude of questions. The exercise of answering these two questions suggests that if we can find some level of comfort in each image along with some level of discomfort, then we will have arrived at a place that requires much, much more work. Pause centers on that work.
Todd Bartel, Curator
Gallery Director
Thompson Gallery

Manmade and Natural Disasters
In March of 2001 I began a series of drawings entitled “Smoke”, a project developing in tandem with paintings I was making at the time. The result of events caused by man or nature, these images have both a physical presence and an ephemeral quality. The drawings here, one of a space shuttle taking off, the other a factory fire in Minnesota speak to the complexities of human nature and our interaction with the rest of the natural world. Violent events worldwide, both natural and man-made, continue to inform my work.
The hurricanes, earthquakes, tsunamis and mudslides of 2005 were a curious parallel to the ongoing tragedies of war in the Middle East. Are these events solely natural disasters, the result of human activity, or a mix of the two? In early 2006, I began a series of oil paintings which combine representation with abstraction and juxtapose the beauty of nature with its devastation. Most recently, the subject of my paintings has been the extreme conditions of flood and drought in many parts of the world as our global environment reacts to warming trends. I set up visual contrast and tension in the paintings, not only with the formal elements of each image, but also with the viewer’s response to the content.
In both the drawings and the paintings my primary objective is to distill, encapsulate, and visually present complex issues with equanimity.
Linda Bond

Black, White and Gray All Over
The images in the Pause exhibition visually deal with things in black and white, but the imagery is far more complex due to the gray areas Bond has explored. Bond has blended traditional process with conceptual and political concerns. On the one hand the portraits are exquisitely crafted with delicate and subtle applications of tone. One the other hand, her juxtaposition of collected and drawn news media prompts viewers to become witnesses to the unfolding story her work chronicles. Bond’s drawings shed light on many areas of war since America initiated its pursuit of a terror-free society and the phrase “mission accomplished” rang across the land. She examines the war on terrorism through her methods of selection and inclusion, using materials that reveal understanding and even compassion for all the gray areas as they continue to emerge. The backgrounds of her drawings are made with graphite, and besides being a traditional drawing material used in pencils, graphite is also used as a material to buffer others—for example, some of its worldly applications include being used as a solid lubricant, and as a moderator in nuclear reactors—and almost all the figures in her ongoing series are enveloped by this safeguard material. Bond has chosen to use gunpowder for the more delicate shades of gray on the features of the faces, bodies, clothing, skin and all the objects depicted in the show—gunpowder, of course, can be controlled to great effects depending on how it is used and to what purposes it is exploited. It may seem, at first glance, that the images in Pause are easily polarized into opposing camps—particularly if we align with one political point of view or another—but the finer shades of gray suggest that the differences and the similarities between these combined truths are harder to distinguish. And the longer we look, the more difficult it becomes to distinguish and separate out the traditional blacks from the whites, so to speak. Bond uses her drawing materials in powdered form, applying them with make-up brushes and other non-traditional tools, which accounts for the range and gradation between the shades of gray. The total effect is one of sublime subtlety, which leaves us in an arrested state of attention.
Todd Bartel, Curator
Gallery Director
Thompson Gallery

For a downloadable PDF version of the Pause exhibition catalog, please click here