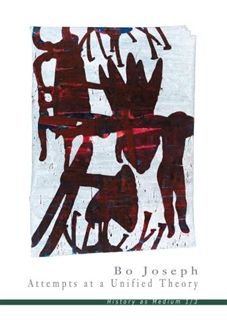 Bo Joseph—Attempts at a Unified Theory

Bo Joseph—Attempts at a Unified Theory
Attempts at a Unified Theory, the first exhibition of the three-part series, History as Medium, examines drawings, paintings and sculptures by Bo Joseph. In his visually arresting work, Joseph scavenges and combines imagery from disparate cultures within fields of intuitive and gestural mark-making. Through unpredictable processes of layering and abrading silhouettes and outlines, Joseph’s methods of abstraction strip away references and contexts inviting new meanings.

Visitors are invited to communicate with the artist, Bo Joseph—please visit the Thompson Gallery Blog.

History as Medium
Part I: Uncollage


Bo Joseph—Attempts at a Unified Theory

History without gardens would be a wasteland. A garden severed from history would be superfluous…The gardens that have graced this mortal Eden of ours are the best evidence of humanity’s reason for being on earth. Where history unleashes its destructive and annihilating forces, we must, if we are to preserve our sanity, to say nothing of our humanity, work against and in spite of them. We must seek out healing or redemptive forces and allow them to grow in us. That is what it means to tend our garden.
Robert Pogue Harrison, Gardens: An Essay on the Human Condition, Preface, p. x
All round Gilgamesh stood bushes bearing gems…there was fruit of carnelian with the vine hanging from it, beautiful to look at; lapis lazuli leaves hung thick with fruit, sweet to see. For thorns and thistles there were haematite and rare stones, agate, and pearls from out of the sea.
The Epic of Gilgamesh, 100

Disturbances in the Field
Bo Joseph—Attempts at a Unified Theory is the first exhibition in the three-part series, History As Medium. Our series, designed to juxtapose three vastly different artists whose interests overlap, examines collage’s inclusiveness and three specific methods for co-opting history’s relics. Each artist in the series combs history to parse out fragmentary remains, which are combined through widely differing processes and which ultimately prompts viewer reassessment, revision and reckoning. Joseph, whose interests are as diverse as his exhibition title suggests, plants his findings firmly within cultivated abstract fields, wittingly forcing his gardens of history to merge and evolve.
It is fitting that Bo Joseph initiates this year’s exhibition series. His work, in general, could easily have been included in our previous shows that explored Contemporary Painting After a Century of Abstract Art, and thus, it beautifully segues into our present series. Furthermore, as a student of Alfred DeCredico (Deconstructing Chaos, January 8 — March 12, 2010), and a dedicated gestural painter, Joseph’s work beautifully resonates with the subjects explored in our last season as much as it exemplifies the late professor’s attitudes about abstraction: all images ever created are abstract; and, recognizable and namable images in the field of painting become a visual hypertext—a multidimensional network in which every point or node can be potentially connected with any other node. This latter concept is of great interest for our present show.
As a teaching gallery, we linger on the teacher-student relationship to examine how far a student moves away from the initial harvest of work produced during the impressionable student years. Thus, this first exhibition looks at History with a nod to the personal sense of the term. More importantly, it is the strategies and conceptual sense that really drives our present investigation. Regarding the personal history, Attempts at a Unified Theory builds from DeCredico's two primary edicts with great imagination. Joseph, too, creates composite images, filled with cultural connections—which he borrows from printed matter. As he layers and stacks the strata of his paintings, he locates his imagery in gestural, non-objective fields, which heightens the need for tending to the connections between things. Furthermore, like many of DeCredico's pupils, Joseph champions his professor's manifesto on adventure and creative risk-taking, because as pointed out in Deconstructing Chaos, when everything is abstract, there is a need to "find a sense of self in the process of risking real ground," all of which in turn has powerful "implications for our audience and the greater community" as they wade through such visual material.
To this day, Joseph embarks on the invitation to adventure and evidence of that background is visible everywhere in his work. It was DeCredico who challenged Joseph to stratify paint as a means of employing subtractive processes. Indeed, Joseph’s love of history and archeology took root because of DeCredico’s teachings. To be sure, Joseph is deeply indebted to his professor’s groundwork. However, the Brooklyn-based artist cultivates his own hybrid method with great distinction. Long after receiving an assignment to “make a drawing in the shower” Joseph still thoroughly washes his work—not so much a process of cleansing, as much as a process of revealing what lies within the sediment. Joseph refers to this creative risk-taking as a kind of "Duchamp-ian chancy process"—he never knows what the forces of washing will expose. Joseph has honed this process with such clarity it has evolved as the hallmark of his art. After all, how many painters ever hired a plumber to create a 6' x 5' portable washbasin to wheel around their studios in which all works undergo the process of expedited erosion? Joseph may be the first. What is certain is that the incredible surfaces that constitute Joseph's work are a rare sight in the art world; humbled by real phenomena and time, Joseph's paintings delight the eye and mind and they mystify our ability to discern natural from man-made. Joseph's history paintings have an authentic patina that is literally rich with unfolding stories.
The once painter, now historian, James Elkins describes painting as a "heavy mineral deposit…laid down by an artist who…had hypostatic feelings about paint." Thus, as archeology is a branch of history dedicated to the study of human history and prehistory—through the processes of excavation—and archeologist's sites are often found near bodies of water, where history readily reveals itself through the forces of water, wind and other natural agents, we can think of Joseph's paintings as archeological gardens that prompt mineral memory. If all gardens require water for nourishment, then it follows that mineral gardens have the additional need of erosion to expose and or polish its hidden gems.
In his book, What Painting Is, Elkins discusses this curious preoccupation that painters have with imbedding thoughts into their process and their material:

And when it is merely paint, it begins to speak in an uncanny way, telling us things that we cannot quite understand. It seems to be infused with moods, with obscure thoughts, and ultimately—in the language of alchemy and religion—with soul, spirit, and "formal life." From that moment on, it never stops speaking. Like alchemists, painters are bound up in hypostatic contemplation: paint seems irresistibly to mean, as if the littlest dab must signify something. It never speaks clearly because—as any sober scientist or humanist will tell you—every meaning is a projection of the viewer's inarticulate moods. Substances are like mirrors that let us see things about ourselves... (p. 45)