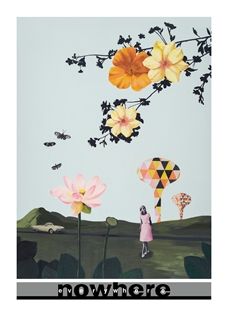 April 1 - June 18, 2016 (Thompson Gallery & thompsongallery.csw.org)
April 19 - May 13 (Red Wall Gallery)
The final show in a 3 part series, Nowhere Everywhere is both an analog and digital exhibition at the Thompson Gallery and its website. Nowhere Everywhere showcases the work of 68 artists that offer a cross section of work examining human perfectibility, dystopic societal issues and utopian potentials.

Nowhere Everywhere
…[I]t goes so heavily with my disposition that this goodly frame, the earth, seems to me a sterile promontory; this most excellent canopy, the air—look you, this brave o'erhanging firmament, this majestical roof fretted with golden fire—why, it appears no other thing to me than a foul and pestilent congregation of vapors. What a piece of work is a man! How noble in reason, how infinite in faculty! In form and moving how express and admirable! In action how like an angel, in apprehension how like a god! The beauty of the world. The paragon of animals. And yet, to me, what is this quintessence of dust?
William Shakespeare, Hamlet, act 2 scene 2, 303-309
Spaceship Earth was so extraordinarily well invented and designed that to our knowledge humans have been on board it for two million years not even knowing that they were on board a ship. And our spaceship is so superbly designed as to be able to keep life regenerating on board despite the phenomenon, entropy, by which all local physical systems lose energy…That we are endowed with such intuitive and intellectual capabilities as that of discovering the genes and the R.N.A. and D.N.A. and other fundamental principles governing the fundamental controls of the life systems as well as of nuclear energy and chemical structuring is part of the extraordinary design of the Spaceship Earth, its equipment, passengers, and internal support systems. It is therefore paradoxical but strategically explicable…that up to now we have been mis-using, abusing and polluting this extraordinary chemical energy interchanging system…We have not been seeing our Spaceship Earth as an integrally-designed machine which to be persistently successful must be comprehended and serviced in total.[1]
R. Buckminster Fuller, Operating Manual for Spaceship Earth, 1970
At some level, one might think that the utopian impulse is implicit in all art making, at least in so far as one thinks that art addresses itself to the basic project of making the world better.[2]
Richard Noble, The Utopian Impulse in Contemporary Art, 2009
Nowhere Everywhere is the final exhibition of a yearlong reflection on the theme of utopias and dystopias—a theme suggested by the Cambridge School of Weston’s English Department and voted into the gallery itinerary by our community of students. Nowhere Everywhere represents an overwhelming cry for change. Over 900 works of art were entered in response to the original call for art during the winter of 2014-15. The subsequent salon-style grouping was designed to reflect the volume and variety of group concerns. Nowhere Everywhere assembles the work of 68 artists who hail from 21 American states and Brazil, England, Latvia and Sweden. While most of the work on view reflects the dysfunctional, unjust, undesirable side of contemporary culture, there are also works that foresee, proscribe or model functional idealism in various forms; others explore fantasy through utopic desire. Viewers are encouraged to categorize the work into these designations and locate the ones that straddle the divisions. The variety of subjects presented in Nowhere Everywhere speaks to the contemporary trend for artists to reflect their political entrapments—to in effect “make the world better.” But underneath the critique is a palpable sense of hope that points to what could be, if only these icons could stay in our mind’s eye and guide us beyond the walls of this gallery.
In addition to the Thompson Gallery exhibition site, Nowhere Everywhere expands to include other gallery spaces at the school, including the Atrium of the Garthwaite Center for Science and Art, the Garthwaite portico adjacent to the gallery’s exterior sculpture platform, the Red Wall Gallery at the Mugar Center for the Performing Arts, and, beginning on April 23, a virtual exhibition on the gallery’s website. The Red Wall grouping addresses the themes of utopia and dystopia with a particular focus on landscape, cityscape and issues related to ecology. The virtual exhibition comprises serial projects and works that were too large to exhibit in our gallery spaces. Viewers are encouraged to read the artists’ statements in the checklist booklets below. Their statements, like the work on view, provide a rich resource of ideas that further shed light on one of the most persistent creative themes of the past five centuries.

In 1516, 24 years after Cristoforo Colombo set out to reach the East Indies and 14 years after the New World was named in honor ofAmerigo Vespucci’s mapping voyages, Thomas More penned Utopia, initiating a literary genre that continues to haunt the imagination. Written in response to the era's contentious relationships among European nation-states, More’s work established the provocative literary conceit of the Utopia, which espoused harmony between populace and government. To promote his captivating mind exercise, More coined the word “utopia”—a clever pun on the Greek words 'ou-topos' [no place], 'eu-topos' [good place].[3] Since it was put into print, the idea of Utopia has occupied the collective imagination and has been referenced by countless thinkers, artists and architects alike, who have contributed to More’s call for justice—idealized or tortured societies that one way or another invoke the need for change.
Originally written in Latin, More’s Utopia played with words to catalyze two central motifs—the imaginary place called Utopia, and the traveler who encountered the Utopians. Together, the place and the traveler establish a frame of mind that exposes tensions between human conflict and human potential, human nature and human perfectibility, “public service [and] contemplative withdrawal.”[4] The “new world” of the Utopians is introduced to readers through a further novelty of story telling: the author plays himself in his actual role as a statesman, a London lawyer in the service of Henry VIII. He meets “a traveler,” Raphael Hythloday, who introduces him to the ideal society in question. Hythloday’s name—the second motif—too is a pun. It is a twist of Latin that translates to mean “peddler of nonsense,” while also being alliterative of the name Raphael—God’s healer and Archangel. [5]This wordplay further pushes the imagination and provokes the desire to entertain the impossible along with the possible. Hythloday’s descriptions illustrate Utopia in great detail. And, cleverly, as no place comes to light, the central motifs and their puns mingle in the mind as the nonsense peddler tells More, and his readers, about the Utopians and their governing systems. Despite the distance in time and space and the implausibility, contemporary readers cannot help but conjure ways to heal society from such descriptions. Written as it is, any reader becomes swept up in the exercise of ushering in change. The legacy of More’s ideas remains relevant even today, as descendant Europeans and visitors from elsewhere live out their own utopian pursuits, however elusive they may be.
Nowhere Everywhere. After 500 years pursuing the potentials of terra incognita, after the rise of democracy in the West and the conclusion of westward expansion, and after much of the mapping of the globe, along with a modicum of understanding that places our “Spaceship Earth” within the solar system, exactly where have we established our utopian aspirations to co-habit this goodly frame in harmony?
Nowhere Everywhere is a contemporary reflection that begins with that question and raises many others. Have we evolved to a point in which our relative societies are free to equally, and without prejudice, develop the minds of all people, at leisure, without rivalry? For all the potential each new generation adds to the human project, are we yet free of the urgency for civic idealism? And what of this great nation, the now over-inhabited new world, which no longer goes by that title? Are Americans close to achieving human perfectibility with all we know in our Western ways of seeing? Today, it seems that there are looming issues everywhere we look, and nowhere do we find the paths to the perfectibility we all know is within our reach. We are compelled to look to iconography like Nowhere Everywhere to guide us and remind us to keep up the good fight. In the words of artist Joseph Beuys (Germany, 1921-86), known for his pedagogy, humanism, and promotion of political action through art actions:
This most modern art discipline—Social Sculpture/Social Architecture—will only reach fruition when every living person becomes a creator, a sculptor or architect of the social organism…Only then would democracy be fully realized. Only a conception of art revolutionized to this degree can turn into a politically productive force, coursing through each person and shaping history.[6]
Todd Bartel
Gallery Director, Curator
Thompson Gallery
[1] R. Buckminster Fuller, Operating Manual for Spaceship Earth: A Bold Blueprint for Survival that Diagnoses the Causes of the Environmental Crisis, Pocket Books, New York, 1970, pp. 45-47
[2] Richard Noble, Ed., Utopias—Documents of Contemporary Art, Introduction/The Utopian Impulse in Contemporary Art, Whitechapel Gallery, London, The MIT Press, Cambridge, MA, 2009, p. 12
[3] Clarence H. Miller, introduction, Utopia, Thomas More, Yale University Press, New Haven, CT, 2001, p. vii
[4] Miller, p. viii
[5] Miller, p. viii
[6] Joseph Beuys, I am searching for Field Character, in Utopias Documents of Contemporary Art, Introduction/The Utopian Impulse in Contemporary Art, Richard Noble, Ed., Whitechapel Gallery, London, The MIT Press, Cambridge, MA, 2009, p. 114


To view the Weston Media Groups video essays for this exhibition, please follow the below links:

Nowhere Everywhere - Part 2: A Conversation with Jennifer Amenta
Back