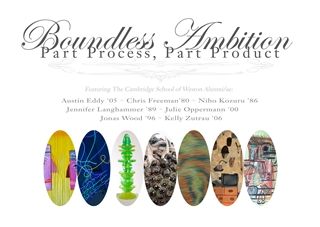 March 30 - June 18, 2012
To honor The Cambridge School of Weston's 125th anniversary, the Boundless Ambition series examines the school's convictions about learning and pedagogy. The third of three exhibitions, Part Process, Part Product features seven Cambridge School of Weston Alumni/ae: Austin Eddy '05, Chris Freeman '80, Niho Kozuru '86, Jennifer Langhammer '89, Julie Oppermann '00, Jonas Wood '95 and Kelly Zutrau '06. This final exhibition looks at the kinship between methodology and productivity via the differences between how each artist approaches issues of abstraction within their respective studio practices.
Visitors are invited to communicate with the artists—please visit the Thompson Gallery Blog.

The proponents of democracy must know that its practices are slow and inefficient in the short run, and that there is a price to pay in terms of infinite patience and continuous effort to make it work…. The ability to weigh arguments, emotions, and unexpressed considerations is one that grows slowly and only through practice. The ability to overcome timidity and say what one has to say as a contribution to the thinking of others is not one which comes easily and without practice.
Dolph Cheek
Rarely have we seen a school that so successfully "lives" its stated philosophy.
Excerpt from the New England Associations of Schools and Colleges, 1974 CSW evaluation