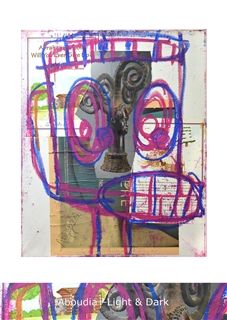 I like kids’ work more than work by real artists any day.1
Jean Michel Basquiat, 1985
Aboudia—Light & Dark, the third exhibition in the Light & Dark series, presents the vivid paintings and collages of Aboudia, which blend traditional African and modern Western art with graffiti-style mark making. The Light & Dark series, which focuses on various interpretations of light and dark—naturalism in the first exhibition, and poetic allusion in the second—turns its attention to examine civil upheaval in two related exhibitions at CSW to address the dark and light sides of civil conflict. In the Thompson Gallery, the art of Aboudia (Aboudia Abdoulaye Diarrassouba, b. 1983, Abidjan, Ivory Coast) amplifies the voices of his hometown’s orphaned children. At the Red Wall Gallery (Mugar Center for Performing Arts), the work of Gonçalo Mabunda (b. 1975, Maputo, Mozambique) addresses the Mozambican Civil War with his assemblage masks exclusively made with residual, found weapon parts and war detritus.
Cambridge School of Weston (CSW) alum Ethan Cohen ’79 (Ethan Cohen Fine Arts Ltd., New York, NY) joined Cambridge School of Weston art faculty and Thompson Gallery Director Todd Bartel to co-curate the final Light & Dark exhibitions. This is the first exhibition of Aboudia’s and Mabunda’s work in Massachusetts and the greater Boston area. The last two Light & Dark exhibitions are also enhanced by a short-run satellite exhibition in the IS (Installation Space, atrium of the Garthwaite Center for Science and Art) of a select group of tribal masks provided by Ethan Cohen Fine Arts. Ethan Cohen—Masks joins the fold of exhibitions to shed light on the influence of African artifacts upon the history of painting. The Thompson Gallery and CSW are grateful for the opportunity to exhibit the art of Aboudia, Mabunda and Cohen’s mask collection; all of the work on view for Light & Dark is brought to CSW courtesy of Ethan Cohen Fine Arts, New York, NY.
Aboudia’s paintings, which captured the violence in his home city of Abidjan, became the focus of international attention starting in 2011.2 Aboudia’s art chronicles the historical, social, economic and political situation of his hometown, with a particular focus on street life for abandoned children. A mural painter and street artist, Aboudia graduated from Centre Technique des Arts Appliqués in Bingerville in 2003.3
The first Ivorian Civil war broke out in 2002 and lasted until 2004, but the country was split between a rebel-held Muslim region in the north and a government-held, largely Christian south. Violence between the two sides persisted for several years until a peace agreement was signed in 2007. Ivorian elections were delayed 6 times and were not held until late 2010; the results precipitated a renewed outbreak of violence in 2011. Thousands of civilians were killed and injured, and hundreds of thousands displaced. Aboudia created pictures that chronicled the brutality of what was happening outside:
While some artists chose to flee the civil war, I decided to stay and continue working despite the danger. I worked in an artist’s studio right next to the Golf Hotel [Ouattara’s headquarters during the post-electoral crisis], I could hear the bullets zipping through the air while I painted. When the shooting got too heavy, I hid in the cellar and I tried to imagine what was going on. As soon as things calmed down I would go back upstairs and paint everything I had in mind. Whenever I was able to go outside, I would paint everything I saw as soon as I returned. Some of my paintings were also inspired from footage I saw on the news or the Internet.4
More then making images about the atrocities of war, Aboudia’s mixed media paintings depicted the strife with a twist of creative force:
My work is similar to that of a journalist writing an article: I was simply describing a situation, in order to create a record of my country’s recent history. I’m an ambassador of the children—they do writings on the walls, their wishes, their fears. I’m doing the same on my canvas. I’m like a megaphone for these children.5
As Cohen has pointed out,
Aboudia was one of those abandoned children and maybe that’s why his paintings are so convincingly powerful. Concern for poverty and children is a global one. He is from Africa and from the Ivory Coast but [his work] goes beyond borders; it’s about street culture, street people. Through his art Aboudia is speaking for the children. He knows what it means to be hungry, not to have money in your pocket, a normal house, a roof over your head. This is what his painting is telling us. He wants to make sure that children who are abandoned are not forgotten.6
Aboudia’s celebrated work—which has often been compared to Jean-Michel Basquiat’s graffiti-esque, text-infused paintings because of a similar sense of child-like abandon, brightly colored lines and the urban, street feel of the work—began to take shape during the 2011 post-election crisis. Aboudia took refuge in his Abidjan basement studio, where he accounted for the surrounding violence, making paintings akin to Picasso’s Guernica, Goya’s The Disasters of War, and the work of Ai Weiwei. He prefers, however, not to be categorized as a ‘war artist.’ Aboudia likens his work to ‘nouchi,’ the street-slang of Ivorian youths. Like nouchi, Aboudia’s art makes use of found “papers, cardboard, anything I can get my hands on.”7 Aboudia’s situation and surroundings gave rise to a way of working:
Most shops were closed for months during the crisis, so paint and other material was scarce. When I ran out of a certain color, I would try to recreate it by mixing the little paint I had left. I also did a lot of scavenging for material for my paintings.8
Central to Aboudia’s work is his attitude towards using what is in his own foreground—“found” materials and “borrowed” imagery from the street kids’ messages scrawled on walls and objects everywhere—the spontaneous and deeply emotional ways these Ivorian children express themselves is his source material and his inspiration:

There was this street language, and I said to myself, ‘graffiti,’ ‘nouchi,’ what can I make of these two things from the street?
Kids in the street—not “street Kids.” Sorry—but the street doesn’t MAKE kids. Kids in the street would write their dreams using crayons, sand, rocks, tiles—whatever they could find. Some drew houses and cars, others drew classrooms and gardens and families—mom and dad. All the things they had missed in life. And I said to myself that I would borrow the writings—and I mean borrow—it belongs to the kids in the street. I needed to deliver their message to exhibition halls to raise public awareness of these roaming children of the street. No—it’s not ME that inspires them—THEY inspire me!9
As Cohen points out:
The group of children he knew on the street, making this sort of new graffiti that he called “nouchi style,” together they’re powerful. By yourself you are not powerful. These messages, there in his painting, he’s talking about the group, the gang.
He is really trying to convey his feelings. It’s bold, edgy.  It’s colorful. It’s free. He is very loose. It doesn’t have to be perfect. It’s happening. It’s part of his very natural, daily life. It’s street art ‘nouchi’ style.10
Voted on by the CSW student body, the Light & Dark theme was designed to support the school’s pedagogical interest in providing platforms for discussion and learning regarding issues of social justice and critical thinking. The Light & Dark exhibition series ends with a triumvirate group of exhibitions to explore the transformative messages inherent in these artist’s works.
I want life to be good—so I treat sadness with happiness. I speak of something sad, but it makes you happy when you look at the painting. Boom! There’s light. There’s color. I use color to transform sadness into happiness.11
Todd Bartel
Gallery Director
Thompson Gallery