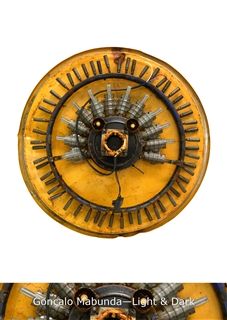 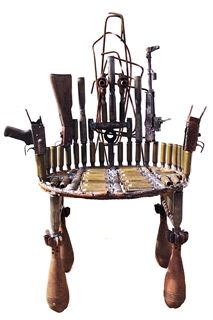 Gonçalo Mabunda—Light & Dark showcases the the found object assemblages of Gonçalo Mabunda (b. 1975, Maputo, Mozambique). Mabunda’s disarming, deceptively aesthetic sculptures fuse African fetish traditions with the national memory of a devastating civil war, transforming residual bric-a-brac of war into objects that suggest alternate visions of how his culture might have otherwise employed itself with ambient materials.

In the war [WW1] things were in terrible turmoil. What I had learned at the academy was of no use to me and the useful new ideas were still unready...I felt myself freed and had to shout my jubilation out to the world. Out of parsimony I took what I could find to do this, because we were now an impoverished country. One can even shout with refuse, and this is what I did, nailing and gluing it together. I called it ‘Merz’; it was a prayer about the victorious end of the war, victorious as once again peace had won in the end; everything had broken down in any case and new things had to be made out of the fragments; and this is Merz…1
Kurt Schwitters, 1930
In occupied Paris, a Gestapo officer who had barged his way into Picasso’s apartment pointed at a photo of the mural, Guernica, asking: “Did you do that?” “No,” Picasso replied, “you did.”2
Pablo Picasso, 1940
Gonçalo Mabunda—Light & Darkis the final exhibition in a series of four that focus on the theme of Light & Dark. Gonçalo Mabunda—Light & Dark presents the welded assemblage sculptures of Gonçalo Mabunda (b. 1975, Maputo, Mozambique). The Light & Dark series, which focuses on various interpretations of light and dark—naturalism in the first exhibition, and poetic allusion in the second—turns its attention to examine civil upheaval in two related exhibitions at CSW to address the dark and light sides of contending with civil conflict. In the Thompson Gallery, the art of Aboudia  ( also known as Abdoulaye Diarrassouba, b. 1983, Abidjan, Ivory Coast) amplifies the voices of his hometown’s orphaned children. At the Red Wall Gallery (Mugar Center for Performing Arts), the work of Gonçalo Mabunda (b. 1975, Maputo, Mozambique) addresses the Mozambican Civil War with his assemblage masks exclusively made with residual, found weapon parts and war detritus.
Cambridge School of Weston (CSW) alum Ethan Cohen ’79 (Ethan Cohen Fine Arts Ltd., New York, NY) joined Cambridge School of Weston art faculty and Thompson Gallery Director Todd Bartel to co-curate the final Light & Dark exhibitions. This is the first exhibition of Aboudia’s and Mabunda’s work in Massachusetts and the greater Boston area. The last two Light & Dark exhibitions are also enhanced by a short-run satellite exhibition in the IS (Installation Space, atrium of the Garthwaite Center for Science and Art) of a select group of tribal masks provided by Ethan Cohen Fine Arts.  Ethan Cohen—Masks joins the fold of exhibitions to shed light on the influence of African artifacts upon the history of painting. The Thompson Gallery and CSW are grateful for the opportunity to exhibit the art of Aboudia, Mabunda and Cohen’s mask collection; all of the work on view for Light & Dark is brought to CSW courtesy of Ethan Cohen Fine Arts, New York, NY.

Mozambique’s tumultuous modern history has long informed its rich art scene. After gaining independence from Portugal in 1975 after a decade-long struggle, a brutal 16-year civil war consumed the country. Although the nation has now enjoyed peace for 20 years, the legacy of these conflicts continues to pervade Mozambican culture.3
Mabunda is best known for his thrones made out of deactivated handguns, rifles, rocket launchers, bombs and bullets. Mabunda’s thrones and “Chief Chairs” are “inspired by African ethnic traditions,” and “represent a critique of the present African governments who often manipulate tragically armed-violence to reinforce their power.”4 In 2013 he began making masks “in the African tribal tradition”5 using the same kinds of materials. Some of his earliest masks are on view in Light&Dark.
In 1992, Mabunda started working as the gallery manager at the Núcleo de Arte in Maputo; in 1995, he became the assistant to the South African artist Andries Botha. Inspired by these experiences, he began to realize his own creative interests, and in 1996 he participated in a three-month course in metal and bronze sculpture at the Natal Technikon in South Africa.6 Since 1997 he has worked as a full-time artist.7
Ethan Cohen’s description of Mabunda’s art provides the background for the work exhibited at the Red Wall Gallery:
Mabunda…had lived through a devastating civil war when he embarked on gathering shards of national memory in the form of discarded weapons fragments, piecing them together into sculptures. Out of that he forged a fantastical iconography derived from African fetish traditions rendered in rusting steel. He welds together menacing instruments of death, bullets, pistols, parts of Kalashnikovs, into disarming objects, deceptively esthetic, fused to suggest a multiplicity of meanings - not least to suggest alternate uses, and indeed alternate visions, of how his culture might have otherwise employed itself with ambient materials. The objects simultaneously invite and repel, obtruding from the universe of child soldiers whose toys they once were.8
In his video portrait of the artist, which can be found on the Ethan Cohen Fine Arts website, EthanCohen poses key questions about Mabunda’s sculptural materials:
Why does he have all these pieces of destruction in his backyard? Is there so much of that, so much abundance of these weapons and bullets et cetera that he can just freely make sculptures? It’s mind-boggling. Are we in the West, Russia, Israel, are we selling all these weapons?9
By the time hostilities ceased in Mozambique, in 1992, international arms dealers had shipped 7 million guns into the country.10
Mabunda’s “unusual practice” of using discarded weapons to form his assemblage sculptures “was reportedly triggered by a 1995 campaign, ‘Transforming Guns into Hoes,’ launched by a union of Christian churches, which sought to encourage gun owners to turn in weapons in exchange for building and farming supplies.”11 “The initiative successfully recovered or recycled 800,000 weapons, Mabunda told CNN. 12 “If we destroy the weapons, the same weapon’s not going to kill anymore,” he explained, saying that his art is “trying to represent each [person] who died with this same material.”13
Mabunda’s art has been compared with early modernist artists, and his structural eclecticism is quite easy to identify in the work. His use of quotidian materials in his sculptures belongs to a century-old tradition that has had many names and reincarnations: Bricolage (Picasso and Braque, 1912), Readymade (Duchamp, 1913), Merz (Schwitters, 1918), Combines (Rauschenberg, 1955), Nouveau Réalisme (French critic Pierre Restany, 1960). In this regard, Mabunda’s art is perhaps most closely linked to the work of Kurt Schwitters’ post-WWI Merz collages, made up of pieces of paper found on the streets of war-torn Europe. While Mabunda’s use of deactivated weapons belongs to this century-old tradition in contemporary art, it also adds to Nouveau Réalisme by pulling into the mix a contemporary trend toward socio-political critique. Mabunda’s work might rightly be called Neosociorealism for the ways his quotidian inclusions force audiences around the world to reconcile the actions of individuals, corporations and governments who sell and supply arms.
As Mabunda’s art fuses the past with the present moment, tradition with innovation, tragedy with transformation—dark with light—he shows us how to transform objects of destruction into objects that question and challenge while inspiring hope and possibility.
Todd Bartel
Gallery Director
Thompson Gallery
__________________________________________________________
1. Dorthea Dietrich, The Collages of Kurt Schwitters, Cambridge University Press 1993, p. 6-7
2. Robert Bettmann, The Guardian, editorial, In Praise of…Guernica, Wednesday 25 March 2009, https://www.theguardian.com/commentisfree/2009/mar/26/pablo-picasso-guernica-spain-war, retrieved March 27, 2017
3. Henri Neuendorf, Mozambique Artist Turns Weapons Into Art, ArtNet News, January 22, 2015, https://news.artnet.com/market/mozambique-artist-turns-weapons-into-art-227477, retrieved March 27, 2017
4. Kulungwana.org, Artist’s Biography, http://www.kulungwana.org.mz/eng/Artists/Goncalo-Mabunda, retrieved, March 26, 2017
5. Neuendorf
6. Kulungwana.org
7. Kulungwana.org
8. Ethan Cohen, Gonçalo Mabunda Bio, Ethan Cohen Fine Arts website, 2015
9. Ethan Cohen, transcribed text from Ethan Cohen Fine Arts’ website video, Batik d’Afrique, 2014
10. Scott Reyburn, New Light on Africa, Art + Auction, October, 2013, p. 100
11. Neuendorf
12. Gonçalo Mabunda quoted byNeuendorf
13. Gonçalo Mabunda quoted byNeuendorf
Back