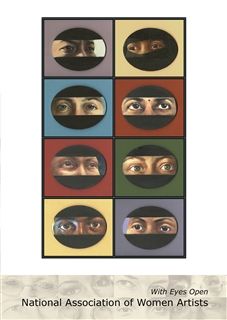 December 19, 2017 - March 2, 2018
The National Association of Women Artists (NAWA)--originally, the Women’s Art Club--was created over one hundred years ago to provide women with opportunities for their voices to flourish in a cultural atmosphere of inequality. With Eyes Open reflects on the state of women’s voices in the Arts and celebrates NAWA artists.
NAWA—With Eyes Open Catalog