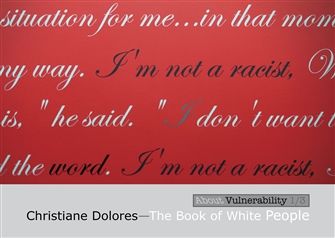 September 6 - February 18, 2020
Residency: October 22-23, 2019
The Book of White People, by multidisciplinary artist Christiane Dolores, is a rumination on whiteness and how that affects people of color. Dolores’ paintings, assemblages, text-based works and installation unpacks this sensitive topic with directness, humor and an invitation for viewer participation.


Christiane Dolores would like to Thank BOOM Concepts, the #notwhitecollective and Art Historian, Rachel Klipa.
Back