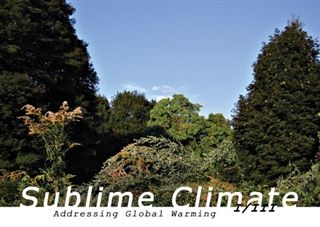 Subliminal—Recognizing the Global Dilemma
First of three exhibitions during the 2007 - 2008 school year to examine climate change.

The immense ceases to be sublime; it surpasses our faculty of comprehension, it threatens to annihilate us.
Johann Wolfgang von Goethe

Confronted with the feeling of the loss of limits, faced with this plunge into the infinite, what classical aesthetics knew as the stupendum or mirum is transformed into mysterium tremendum et fascinans, in other words, 'sacred horror.'
Jean Clair

We're at this kind of moment in time, where we have this test ahead of us-in terms of our relationship with the natural world-and if we pass the test, we get to keep the planet.
Mark Dion

This past January, the National Climatic Data Center (NOAA) announced that 2006 was the warmest year on record. This exhibition is a glimpse at the work of contemporary artists who have created art that examines climate change. This show was not meant to be an exhaustive survey, nor have we attempted to proscribe solutions, although many of us who have worked for this show have devised ways to be mindful, careful, and respectful of our choices for how to use energy and resources as we brought this show into fruition. An important goal of Sublime Climate is to expose visualizations of what many of us have slowly acquiesced regarding global warming: the impact of our ways of life upon Earth's ecosystems has resulted in climate change.Sublime Climate is an unusual project in that it has been organized as a triptych exhibition. It is our hope to offer our viewers opportunities to understand the growing concerns and complexities of global warming. Eighty-four contemporary artists, representing eighteen states and five countries, answered the call for art. Forty-five will be exhibited in three separate shows between October 2007 and June of 2008. Despite the sampling, it is clear that many artists are working today to effect change. Each exhibition segment chronicles important milestones in the struggle to recognize, understand and work with the realities of one of the most complex problems our species has dealt with in recorded history. While the show chronicles the evolution of this global dilemma segueing into the initiatives of today, ours is only a loose structure from which to consider specific works, as some work could easily fit into more than one of the exhibit segments. But even with such generalities, we are nevertheless compelled by heightened feelings of awe, frustration, anger and fixation on the aspects examined by each artist and the juxtapositions among their collective works.

As a title, Sublime Climate aims to conjure and galvanize several senses of its terms. To use the phrase 'sublime climate' is to refer to a location worth visiting to for recreation and holiday, specifically because of beautiful weather. However, re-creation, holiday and 'sublime climate' all have other connotations given the present set of conditions. Some may enjoy the warmer winters of 2006 and 2007, but these days are not likely to be seen in the larger context as vacation days, free from worries. The trends of climate shift are all too menacing—they threaten to alter the known landscapes of our paradise in Biblical proportions. As a verb, sublime means to undergo a process of converting a solid into a gas without the intermediate liquid phase, and such phenomenon are suspected regarding the glaciers of Kilimanjaro,1 and other regions. For the Romantic poet and painter, the sublime in nature was a driving concept. It inspired the appreciation of and the search for places and spaces so vast that the natural world was emblematically envisioned as wild, omni-abundant and boundless—a celebration of all that is good and yet to be explored and harnessed. It is easy to see how the effects of the work of nineteenth century artists, scientists, and pioneers have evolved to our own sense of pastoralism and national identity. More importantly, however, the thought of humankind effecting change in nature was once, and not too long ago, considered hubris. All these senses play eerily on the mind as we consider a new kind of sublime: the combined impact of our collective actions upon this planet since that past century is adding up to a scale so vast, it is ironic we just could not see it coming. Like a preadolescence, modernism did not foresee its impact, and for far too long this recognition was below the threshold of perception.Today our hubris has never been more evident as we recognize the web we have collectively woven. And while it took decades to accept our arrogance, today we cannot quickly enough stem the tide of what we now know to cause global warming, which involves, as Mark Maslin points out in his book, "Global Warming": A Very Short Introduction," "not just the use of natural resources that alter the ecosystems of the world, but also the ecosystems we have built involving economics, sociology, geopolitics, local politics and individuals' choice of lifestyle."As a teaching gallery, this exhibition hopes to inspire its viewers to continue the necessary work to reclaim our place in the balance without recklessly tipping the scale. Unlike the explorers of previous centuries who helped to pioneer visualizations of the seemingly limitless sublime, we twenty-first century pioneers of the new sublime are acutely aware of our own limits and the threat is far more real than romantically understood thoughts of immensity and abundance. Mark Dion's point turned upside-down is what the new sublime is all about: Will the planet keep us? And what can we do, so that we can endure along with our ways of life? The climate these artists hope to affect is one in which peoples united are motivated to make changes right now.Todd Bartel, CuratorGallery Director

To view a pdf document of the artist's statements, please follow this link: Artists' Statements.