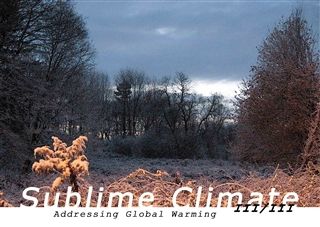 The phenomena of the physical world collectively, including plants, animals, the landscape, and other features and products of the earth, as opposed to humans or human creations.
Oxford English Dictionary
When in the Course of human events it becomes necessary for one people to dissolve the political bands which have connected them with another and to assume among the powers of the earth, the separate and equal station to which the Laws of Nature and of Nature's God entitle them, a decent respect to the opinions of mankind requires that they should declare the causes which impel them to the separation.
Declaration of Independence
Our ways of life are non-negotiable.
Popular Misconception
UNLESS someone like you cares a whole awful lot, nothing is going to get better. Sad to say, but, it's not.
Once-ler, from “The Lorax,” by Dr Seuss

The course of human events has made it necessary to reconsider our course of action and our place in the natural balance. Our ways of life are in question and we have begun to renegotiate. Exactly what are we humans entitled to on this finite planet we have inherited? Do we now have a better sense of the laws of nature than we did only a couple short decades ago? Have we realized, soon enough, that our assumptions about the powers of the Earth have been grossly shortsighted? Have we collectively recognized our group impact to the point where we can effectively right the balance? Union is strength. How many books, movies, works of art, or even just thoughts have sung the praises of group strength? The thought exercise goes something like: “If only they all figured out how to stand together, ‘X’ could be accomplished!” Sublime Climate is an exhibition, which points to such understanding and much more. Symbiosis—Redefining Nature is the final of three exhibitions and it focuses on a small cross-section of seventeen contemporary artists who examine climate change and who specifically work to reject antibiosis.
Much of the work grapples with the appropriate use of natural resources. Some of the work extends the foci of our previous exhibitions, and some of the work imagines various processes of transformation that are needed to dissolve the climate crises, or at least our notions about the nature and the present condition of the planet. Of course, regarding ecological alternatives, it has been widely asserted that escaping the clutches of ensconced societal trends and patterns is indeed an arduous and complex job to accomplish. Furthermore, it is understood that there are inherent contradictions in mounting a show about climate change while using the technologies, which are in question in order to mount the show in the first place. We have had to start from where we are, flawed as that may be, and this, too, is suggested by virtue of any would-be audience who willfully adopts any number of subjects, ideas or suggestions explored by the artists of Sublime Climate, because as of yet, there is no real way for us to all navigate the future until we all figure out how to embrace the needed changes together.
Nothing about this particular segment of Sublime Climate is easy. By far, it was the most challenging to install and by far it is the most demanding to maintain. This exhibition comes attached with a call for stewardship—indeed, without such a mindset for coordinated action; much of the work in this exhibition would simply wither away and die, or otherwise stop functioning. Tending to the basic needs of the work in this show is intentionally symbolic of the widely shared view by these artists that we must all tend to the environmental concerns of today. As noted in our first exhibition, this is a most complex and perplexing predicament in which we find ourselves, for the actuality of global warming spans not just one dominant culture, but all of them—despite the level of industrialization—as well as our web of interconnected systems, our respective needs and our apparent opposing realities. When large independent groups tend to their surroundings together, there is a particularly wonderful word that describes such a coordinated and sustained effort. Author Charles Morrow Wilson describes the etymology of “commensal”:

The Romans had an especially pertinent word for the ways of living roots in living soils. This word has been revived as “commensalism.” Its Latin roots (no pun intended) are cum—“together”—and mensa—“table.” The gist of meaning is eating together at a common table. In biology shoptalk “commensal” has come to mean associated with or living together in an intimate, more or less continuous manner or vital relationship.

Stated quite literally, roots and their fellow tenants of the soil share a common table at which they eat together (sometimes they eat each other) and for good measure help serve the foods, clear the table, and attend to the garbage, together. Thus the concept of soil as a vast extension of dining tables is a meaningful metaphor.1

What is on our planet’s table is a grassroots natural revolution. Commensalism recognizes both antibiosis and symbiosis as integral if not necessary, and we humans must finally join that table. It is not a new idea, but it is one that is particularly relevant for the human race during the next century. It is a marvelous word that recognizes group cooperation, which includes, not separates, creative along with destructive acts as parts of the natural process. And this suggests a needed shift in perception.
Our creations—the things that we make as responses to what we either discover or are curious to learn about—of course, include everything not considered to be nature: cars, factories, ourselves and all the objects we have ever made. According to the first definition of nature, not only us, but our creations are not considered part of the natural world—our definition separates these into a category unto their own. If the first definition of “nature” is correct, than Michael Crichton’s Jurassic Park character, Malcolm Ian, is accurate when he says in the well-known film, “…discovery…is a violent, penetrative act that scars what it explores. What you call discovery, I call the rape of the natural world.” But isn’t it possible that these creations—all that we have made since the debut of our first tools—are not unlike the artifacts of the natural world: trees, rocks, mountains etcetera? Our definitions have maintained that they are not. So far as we know, rocks, trees and mountains do not cause global warming by themselves—they may indeed mitigate the circumstances of climate in various ways, but they do not themselves prompt environmental events. But, what we make does indeed change the atmosphere, the waters and the land. Apparently, the time has come for us to expand our notions of natural forces and to recognize our collective objects as forceful as much so as our own wills, and that these forces, while insignificant compared to the volume of force in a storm, the raging sea or an earthquake, for example, nevertheless have a strong place in the shaping of our ever-changing global environment.
I have argued elsewhere that if we continue to view the things we make and ourselves as separate from natural landscape, then we need a new definition to describe places that have been untouched by us. Does such a place exist anymore? Relatively speaking—in geological time—it is fairly recent that there existed whole tracts of land unvisited by human beings and unaffected by our creations. But, we now recognize that through gas emissions and our various uses of fossil fuels and other natural resources, among many other things, the whole of the surface of planet has been touched by the increase of temperatures that greenhouse gasses causes. Despite this fact, it has been my conjecture that we need a new word to describe tracts of land that were once untouched by man, in order to more fully understand our impact. I call this term a “landview.” The word landscape is an artistic term, that we have all taken for granted, that specifically emphasizes the creative acts involved in land forming, be they natural, pictorial or manmade. This fact is curious and shortsighted given our definition of nature. The ecological term landview emphasizes seeing, understanding and respect.
The artists of Sublime Climate have wittingly called for a change of heart, and a change in the way we view land and the ways in which we inhabit land. In many ways, Sublime Climate has been a “declaration of interdependence” and a manifesto for a collective separation from not people, but past ideologies. What is sublime is the scale and scope of what this suggests for all of us. The artists of Sublime Climate recognize the human need to evolve our views of nature, land and our place in the balance. Perhaps, with such redefinition and the accompanying need for new and relevant re-organizing principles that inspire further shifting—which, this show suggests—we may all collectively move in concert to reclaim the planet.
Todd Bartel
Gallery Director, Curator
Thompson Gallery

[1] Roots: Miracles Below, Doubleday, Garden City, NY, 1968, p. 86.
Note: For the comparative definition of landscape and landview, please review the artist’s statement: Terra Reverentia, which may be found at http://toddbartel.tumblr.com/.
Back