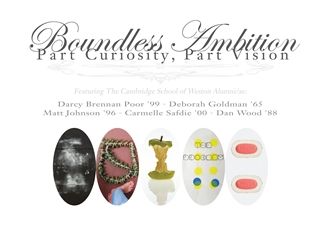 As part of The Cambridge School of Weston celebration of its 125th anniversary, the Boundless Ambition series examines the school's convictions about learning, process and product. The first of three exhibitions in the series, Part Curiosity, Part Vision, presents the work of five alumni/ae including Darcy Brennan Poor '99, Deborah Goldman '65, Matt Johnson '96, Carmelle Safdie '00, and Dan Wood '88. The show explores creative insights, which prompt conceptual shifts and changes of mind.
Visitors are invited to communicate with the artists—please visit the Thompson Gallery Blog.

The progressive school teaches the [student] to think for himself instead of passively accepting stereotyped ideas. It keeps always in mind the fact that each [student] is different from every other, and that what makes an educated person useful in his particular walk of life, what makes him interesting, what makes him an individual, is not his resemblances to other people but his differences. [1]
John French, 1931
All we had was boundless ambition, a set of convictions about the possibilities of private secondary education and the need for drastic changes. [2]
John French, 1931