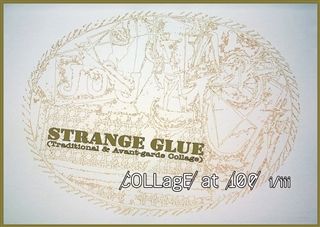 9/7/2012
Collage at 100 I/III
September 7 - November 20, 2012
Collage at 100 is a three-part, yearlong exhibition series that celebrates the centennial of the appearance of collage in painting. In its first 100 years, collage has become ubiquitous within contemporary art and culture and its myriad applications have expanded its original definition to become the most inclusive of artistic processes. Strange Glue (Traditional & Avant-garde Collage), the first show in the series, assembles the work of more than 100 contemporary artists as it traces the transition from traditional to avant-garde approaches to papier collé.