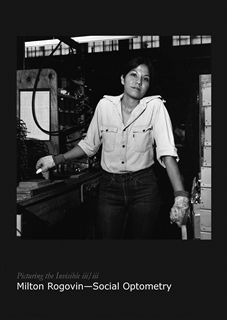 Picturing the Invisible explores photography as a tool of scientific, personal and social visualization. Social Optometry, the third and final exhibition in the series, examines the work of social documentary photographer Milton Rogovin, who unflinchingly used his photographs as a vehicle for creating social awareness of working-class citizens.

Exhibition catalogs are available at: http://www.lulu.com/spotlight/unfoldingobject


Desire has no history—at least, it is experienced in each instance as all foreground, immediacy. It is aroused by archetypes and is, in that sense, abstract. But moral feelings are embedded in history, whose personae are concrete, whose situations are always specific. Thus, almost opposite rules hold true for the use of the photograph to awaken desire and to awaken conscience. The images that mobilize conscience are always linked to a given historical situation.1
Susan Sontag, 1973
Rogovin invariably saw his picture-making through the filter of political action, social justice, and an abiding sympathy for the dignity of his fellow human beings.2
Douglas R. Nickel, 2006
As I see it now, my whole attitude toward African Americans and other ethnic groups was shaped by the socialist teachings that I absorbed… I realized that there were no “special” people. We were all made of the same “cloth” and everyone should be treated as brothers and sisters. The radical movement shaped me into a new person, concerned about others. We fought for health insurance for all, for social security and old-age pensions. We fought for unions and jobs for everyone. And we not only fought for “Bread” but also for “Roses.” Everyone should be entitled to an education and everyone should have access to the arts, the “Roses” that help to create a truly human being.3
Milton Rogovin, c. 1990s
Milton Rogovin—Social Optometry is the final exhibition in the Picturing the Invisible series, which turns its attention from the scientific and personal points of view of the first two exhibitions toward one of social visualization, dissent and activism. As Tony Loreti beautifully illuminates in his essay for the exhibition, Milton Rogovin used photography as a vehicle to bring “the forgotten ones4” to light, picturing who he believed to be culturally invisible. Rogovin worked for five decades, using his camera to advocate for the rights of working class people everywhere he traveled. Social Optometry examines a carefully selected overview of Rogovin’s photography, which presents its viewers with powerfully candid images of ordinary people in their homes, workplaces and community settings. Also on view, and essentially providing a verbal soundtrack for the exhibition, is Michael Frisch’s film Portraits in Steel—An Audial-Photographic Documentary, which showcases Rogovin’s Working People photographs as it documents the fall of Buffalo NY’s steel mill industry through recorded interviews.
Two important factors influenced the remarkable jump Rogovin made from being an optometrist, helping single individuals see better, to becoming a photographer and showing society at large how and what to see. The first factor, as Melanie Anne Herzog points out, was Rogovin’s background:
Born in 1909 in New York to a Russian-Jewish immigrant family, Rogovin was radicalized by the widespread deprivations he witnessed and experienced during the Depression and dedicated himself to working for social and economic justice. He began practice as an optometrist in Buffalo, serving union members and other workers.5

Milton and his wife Anne were politically active in Buffalo, NY, after World War II, engaging in union organizing and voter registration in Buffalo’s African-American community.6 This work led directly to the second factor precipitating Rogovin’s career shift: how the government received his reformist activism. Rogovin was called to testify before the House Committee on Un-American Activities (HUAC) during their 1957 hearings.7 He refused to answer most of the questions asked and was quickly dubbed “Buffalo’s No.1 Communist,”8 losing most of his optometry clientele as a result of the publicity. Feeling “silenced”9 in his activism, he was catalyzed into photography as a way of continuing to speak out regarding the injustices he was witnessing. Milton Rogovin produced approximately thirty thousand photographs in his five-decade career as a photographer (The Library of Congress holds 29,700 black-and-white negatives, 2,500 contact sheets, and 1,130 signed prints).10 In 2011, Rogovin died at the age of 101, actively advocating for issues of social justice until the end of his life.
When considering Rogovin’s photographs, it is important to keep in mind the artist’s collaborative methods as a documentarian. One key example of Rogovin’s collaborative spirit was the Portraits in Steel project, which ultimately became not only a long-term documentation project but also a book and a film by Michael Frisch. Initially, Rogovin had worked with steel mill workers to take portraits in their workplace and homes during the 1970s. A decade later, Rogovin and Frisch worked together to document the fall of the steel mill industry in Buffalo in the late 1980s, capturing new portrait photos along with verbal testimonials. While only a couple of the 1970s Portraits in Steel photographs are in Social Optometry, Frisch’s film includes four full sets of these photographs, spanning the 1970s & 1980s. Comprising of photographs by Rogovin and edited audio excerpts from interview recordings—the source material for edited oral history transcriptions for the 1993 Cornell University Press publication—the film and book juxtapose photographs taken from Rogovin’s Working People series with portraits of the jobless workers in their homes a decade after the 1970s portraits. Hearing the stories of the former steel workers, as well as reading their testimonials at the end of this catalog, provides powerful examples of the dialogue that prompted Rogovin to know his subjects and continue his work to fight for the common man. As Herzog posits, the central question to ask regarding his photography/collaboration/documentation is “in what ways do these photographs and the verbal testimonies tell the stories of his subjects’ lives?”11 Social Optometry asks its viewers: how can we look again more clearly, and in effect re spect the dignity of our fellow human beings?
The Thompson Gallery would like to thank Mark Rogovin for his invaluable assistance and infectious enthusiasm, and for providing all of the information and digital images needed for this publication—including Milton Rogovin’s poetry—as well as all his help in bringing this exhibition to CSW. The Gallery is most grateful to Michael Frisch and his assistant Melanie Morse for revising his film Portraits in Steel—An Audial-Photographic Documentary—which was exhibited for the first time in its revised version—as well as the corresponding transcripts from Rogovin’s and Frisch’s book collaboration, which are reprinted at the end of this catalog and also at the end of Tony Loreti's below essay. The gallery is also thankful for the Syracuse Cultural Workers’ loan of the works on display and would like to acknowledge Christopher Stewart for coordinating with our gallery.
I am particularly thankful for the contributions of Tony Loreti and Anne Rearick, who helped me conceive and plan the Picturing the Invisible series, and for Tony’s wonderful suggestion to bring the photography of Milton Rogovin to our campus. And I am deeply appreciative of his thoughtful and informative essay on Milton Rogovin’s photography, outlining the work on display and the factors that inspired Rogovin to pursue his extraordinary career as an artist.
Todd Bartel, Curator
Gallery Director
Endnotes
1. Susan Sontag, On Photography, Dell, New York, NY, p. 17
2. Melanie Anne Herzog, Milton Rogovin: The Making of a Social Documentary Photographer, Center for Creative Photography, The University of Arizona, Tucson, University of Washington Press, Seattle, 2006, Forward by Douglas R. Nickel, p. 7.
3. Herzog; Introduction, quoting Milton Rogovin from “autobiographical writings, interviews and other sources,” p. 12.
4. Melanie Anne Herzog, Milton Rogovin: The Making of a Social Documentary Photographer, (from the artist’s photo series title “The Lower West Side: The Forgotten Ones”), Center for Creative Photography, The University of Arizona, Tucson, University of Washington Press, Seattle, 2006, Forward by Douglas R. Nickel, p. 83.
5. Herzog, p. 12.
6. Ibid.
7. Ibid.
8. Ibid.
9. Ibid.
10. Library of Congress website, http://www.loc.gov/rr/print/coll/238_rogo.html, 3/20/14
11. Herzog, p. 12.


Exhibition catalogs are available at: http://www.lulu.com/spotlight/unfoldingobject


Joe Kemp
Joe – Joe Kemp
You were the one who cleared the channels
so the molten metal could flow
like a river of gold
Joe – Joe Kemp
You were the one who breathed the poisonous fumes
which rose from the river of gold
When you died, Joe
the “picture man” wanted to honor and remember you
The “famous” photograph appeared in the
column announcing your death
and your image graced the
covers of books and magazines
Who can imagine
that a man, a working man, a Black man
who, in his lifetime, attracted no attention
is gazed upon through the decades
by the grace of a “picture man”
whose camera has given our Joe –
our Joe Kemp – new life
Corresponds to checklist number:  31. Working People, 1978
[Joe Kemp, Steel Worker with Shovel, Hanna Furnace, Buffalo, NY, 1978]


Trembath
There he was – sitting in a casting
No – not goofing off – just resting
A nice guy, beard and all – waiting to have his picture taken
“Welcome to our home!”
He takes the black rabbit from the cage.
There he stands next to his pregnant wife
They’re ready for the picture –
I needn’t tell them how to stand.
Seven years have passed
They welcome us once again
Then he and his pregnant wife plus their seven year old son
stand ready for the picture
When we are leaving, the smiling wife whispers to me
“Picture man, every time you come, I’m pregnant.
Do me a favor – PLEASE DON’T COME AGAIN!”
Corresponds to checklist number:  Working People, 1976 – 1987
[Steel Worker Resting on Mold, Shenango Steel, Buffalo, 1976-1977]


Joey
We waited a long time
He’s come at last
Our little Joey, Joey, our little Joey
Years and years have come and gone
And has taken its toll on some of us
Now I look up at my Joey –
No longer my little Joey.


My Theme Boy
His land is dying
You can see it
in his eyes
The mines are closing
This too is in his eyes
Look into his eyes
They will tell you lots – lots more
Of mountain tops- stripped and gouged
Of streams polluted
Of fish destroyed
Remember, America
This should be
This must be
The land of opportunity and equality
for all
Including this little boy.

The Miner and Her Poodle
Picture Man, please take
this picture with my poodle.
How can I refuse?
There she stands
blonde hair with black base
eye make-up and lots, lots more.
and, nestling in her arms is
is her snow-white poodle.
Here, in the mine – she poses
her face blackened with coal dust
her blonde hair covered with a hard hat
with eye make-up
and lots, lots more.