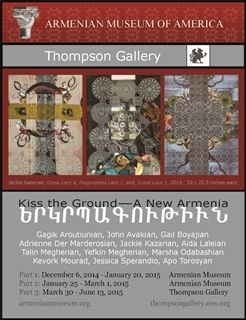 In his introduction to his great-uncle’s book, Armenian Golgotha: A Memoir of the Armenian Genocide, 1915-1918, Peter Balakian acknowledges the impact of the “literature of witness:”
Memoirs such as Primo Levi’s Survival in Auschwitz, Elie Wiesel’s Night, Michihiko Hachiya’s Hiroshima Diary, Nadezhda Mandelstam’s Hope Against Hope, and a many others…have allowed us acquaintance with individual victims and perpetrators, offering insights into the nature of torture, cruelty, suffering, survival and death.
In this “age of testimony,” insight into the catastrophes of the 20th century is abundantly available in the art of those artists who have boldly explored the darker side of humanity. The artists of A New Armenia have shed much light upon the “forgotten genocide,” and have afforded us a better understanding of the conscious makeup of contemporary Armenian identity. But there is also the fact that the splintered Armenian culture is vetting their place in the world; diaspora and homeland Armenians have never let go of the vitality of their culture and have worked to keep alive much of their traditions and cultural grounding.
Collectively, the work in Kiss the Ground—A New Armenia juxtaposes complicated issues for consideration, in which reverence often commingles with solemn remembrance. As the title of the series implies, veneration requires effort. However challenging, such exertion helps to evolve understanding into a new Armenia.
Todd Bartel
Gallery Director, Curator
Thompson Gallery
[1] Grigoris Balakian, translated by Peter Balakian, with Aris Sevag, Armenian Golgotha: A Memoir of the Armenian Genocide, 1915-1918, Vintage, New York, NY, 2010, p. xiii
[2] Elliot Baker, Kiss the Ground: Elliot Baker—The Past Is Not Past, Thompson Gallery and Lulu.com, 2014, p. 40
[3] Rev. Fr. Daniel Findikyan, Ed. The Divine Liturgy of the Armenian Church, St. Vartan Press, New York, 2011, ix
[4] John Avakian, Artist’s Statement Part II—Lest We Forget, published in Kiss the Ground: Elliot Baker—The Past Is Not Past, Thompson Gallery and Lulu.com, 2014, p. 83
[5] Apo Torosyan interview, 10/13/14
[6] Gagik Aroutiunian, Artist’s Statement, catalog to the exhibition, Gagik Aroutiunian—Kiss the Ground, Thompson Gallery and Lulu.com, 2014, p. 146
[7] Jackie Kazarian, quoted from video, Project 1915, http://vimeo.com/115499757, 1/11/15
[8] Ibid.
[9] Ibid.
[10] Jackie Kazarian, email correspondence, 1/8/15
[11] Kazarian, quoted from video
Back