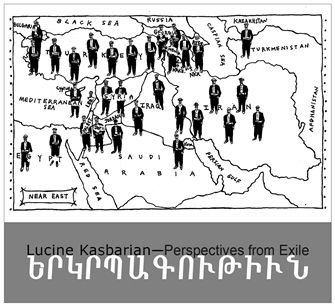 Lucine Kasbarian—Perspectives from Exile is a special, additional exhibition, added to the Kiss the Ground exhibition series, designed to be concurrent to A New Armenia (Part 3). Perspectives from Exile examines the political cartoons of Lucine Kasbarian, who's work unflinchingly chronicles the intergovernmental relationship between Armenia, Turkey and the United States of America, the history of the Armenian Genocide, and the persistent denial of those crimes against humanity of over one hundred years ago.

When done properly, the political cartoon stimulates and creates opinions; is a kick-starter of conversation and discussion; and is the essence of confrontation put into art form.
Patrick Oliphant (b. 1935), Pulitzer prize-winning political cartoonist
The political cartoon has always served as a special poke, jab or nudge: A reminder to elected officials that they are public servants.
Herbert Block (b. 1909, d. 2001), Washington Post cartoonist
Political cartoons are critical of society, and nothing is more patriotic than social criticism. The First Amendment of the U.S. Constitution doesn’t exist so that we can freely praise our elected officials; it exists so we can freely criticize them.
Chris Lamb (b. 1958), journalism professor at Indiana University-Indianapolis, and author of the book, Drawn to Extremes: The Use and Abuse of Political Cartoons.
Lucine Kasbarian—Perspectives from Exile is a special, short-term exhibition, added to the Kiss the Ground exhibition series to augment the artist’s slide lecture on Monday May 18, 2015, and run concurrent with A New Armenia (Part 3). Perspectives from Exile examines the political cartoons of Lucine Kasbarian, who’s work unflinchingly chronicles the intergovernmental relationship between Armenia, Turkey and the United States of America, the history of the Armenian Genocide, and the persistent denial of those crimes against humanity of over one hundred years ago.
Kasbarian is a New Jersey and Massachusetts-based children’s book author and syndicated journalist/political cartoonist. As a cartoonist, Kasbarian’s intention is to “spotlight realities and hypocrisies that do not receive adequate coverage in mainstream media; to see her work appear in media outlets that reflect the traditions of a truly free press; and to drive the points home in absurdist, paradoxical ways by drawing from history, popular culture and personal experience.” 1
Lucine Kasbarian, is a second generation, American-Armenian descendant of Genocide survivors, brought up in an Armenian-speaking home where humor, politics and the arts shared equal stage.2 Kasbarian first began producing political cartoons in 2007 in response to the appalling murder of Armenian journalist Hrant Dink by Turkish gunman Ogun Samast, as a way to constructively express her outrage over that social injustice.3 Since then, Kasbarian’s comics have appeared in a number of publications including The Armenian, Assyrian and Hellenic Genocide News; The Armenian Weekly; Foreign Policy Journal; Independent Australia; Keghart; Women’s International Perspective; and Zartonk Daily.
Kasbarian’s cartoons are typically printed in high contrast, but for this exhibition, they have been scanned and enlarged to twice their original size in order to provide our audience with insight into her creative process. While Kasbarian’s earliest works were drawn in pencil, she has since consistently worked with everyday materials, using whatever black, or blue pen is on hand, and she now works exclusively on 8.5 x 11 copy paper. Over the past eight years, Kasbarian’s work has evolved from a handful of initial cartoons into a studio practice that is becoming known and sought-after. Now, with dozens of cartoons in her portfolio, Kasbarian has largely developed her own visual language and iconography as she chronicles Armenian political affairs. In Kasbarian’s comic/tragic cosmology, all subjects are revisited, as current events develop in today’s news and re-inform yesterday’s understandings. In her effort to “spotlight realities and hypocrisies,” Kasbarian’s work functions much like holding up two mirrors to juxtapose opposing and unreconciled views. Kasbarian points those mirrors not at her own words, but at the competing statements and ideas of others. She downplays her personal politics in her drawings, while her writing makes her thoughts and connections more explicit. Because of the material she is examining in her work, her audience is afforded an opportunity to see other sides of the Armenian story—perspectives which allow our viewers opportunities to consider the myriad voices of Modern Turkey and others.
Detailed statements outlining Kasbarian’s ideas and connections for what prompted each cartoon can be found in the booklets below. Her statements provide insight into her struggles, frustrations and arguments about the intergovernmental politics she and her fellow Armenians navigate on a daily basis. The statements in the booklets are necessarily arranged in chronological order, but the placement of the reproduced drawings on the wall shift a few works out of chronology for the sake of a establishing a mirror-type installation arrangement.
Kasbarian’s political cartoons provide the Kiss the Ground exhibition series with a set of lenses through which to examine both historical and contemporary affairs. Her work magnifies the ongoing unrest between involved nations after what is now over a century of Genocide denial, and brings into clarity the complicated relations between homeland Armenians and Diaspora Armenians—a subject that until recently has not received the attention it deserves. The Kiss the Ground exhibitions were intended to provide a space for descendant, Diaspora Armenian voices to be heard and considered. The previous exhibitions in the series explored taciturn, cryptic, poetic, and iconic artistic strategies and were organized so that as the series progressed the intensity of voice and style increased. Perspectives from Exile, in turn, amplifies stark, sobering and unsettling views, which bring into focus the contemporary struggles of the Armenian people.
Todd Bartel
Gallery Director, Curator
Thompson Gallery
_________________________________
1. Lucine Kasbarian, reprinted with permission from the artist’s Bio, 2015.
2. Ibid.
3. Ibid.