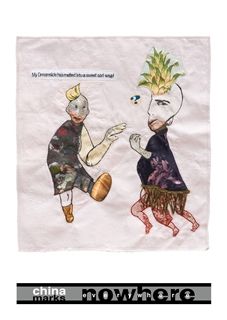 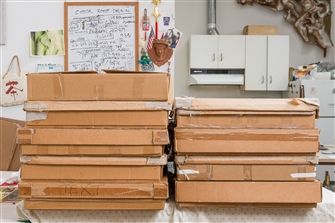 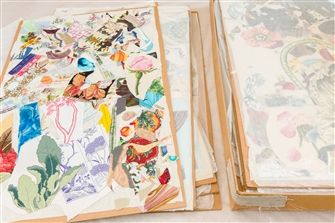 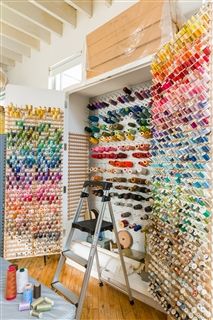 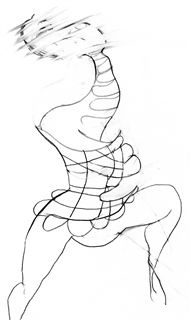 The first of three exhibitions in the series, China Marks—Nowhere Everywhere explores social relationships, human conflict and human imperfectability through a 13-year survey of the fantastic and irresistibly irreverent, constructed fabric drawings of China Marks.

The computerized embroidery machine can also translate line art into sewn lines. Marks scans high contrast line drawings and uses CAD software to translate them into digitally sewn formats. In addition to using her own drawings, Marks appropriates a variety of drawn imagery, including but not limited to “microscopic things, images from old plastic surgery books, and images from Chinese coloring books [she] found on the streets of New York.”11 Marks has made use of this particular drawing possibility in many of her recent works, and it is a common feature of her Short Subjects series—for example, the body and dancer’s skirt in Gestural Truth (figure 4 and page 105). Gestural Truth also elucidates Marks’ collage sensibility regarding the way she includes a variety of techniques in a single work. The anatomical imagery in the bottom left corner, for instance, is a 1980s drawing study Marks made by copying an image from an anatomy book and then printing it onto fabric using a photo-emulsion screen-printing process. Marks appropriated that anatomical fabric print and seamlessly incorporated it into Gestural Truth, joining it with the scanned and computer-sewn version of another drawing she made entitled Prancing Girlie No-face—several completely different technologies mashed together into one sewn drawing. Marks’ attitude toward materials is voracious—all raw material is up for grabs when it comes to making her drawings.
The work on display in China Marks—Nowhere Everywhere provides numerous examples of Marks’ ongoing, series-based drawing projects, as well as single drawings—see: Speculative One-Offs, (pages 22-57), Books (pages 60-93), Broadsides (small, digitally generated, text-based drawings, pages 96-101), Short Subjects (small drawings with a distinctive linear line quality, usually on white or off-white fields, pages 104-123), and Altered Paintings (a series of drawings on contemporary tapestry copies of classic paintings, pages 126-133). Additionally, after the series work in the catalog, there is a chapter dedicated to showcasing the versos of several of Marks' drawings (pages 136-145). The versos make visible the compositional structure of key elements in a given work, while shedding light on Marks' approach to using thread and the exquisite sense of line that proliferates her work.
Marks' most recent body of work, the Altered Paintings series, is a major achievement for Marks and a significant moment in the history of collage—the works in the series are likely the first of their kind. As Marks elucidates, there are two levels of alteration at work in her Altered Paintings series that raises interesting questions about representation, abstraction and appropriation art:
While I have been calling them "altered paintings," that does not make clear how profoundly changed they already are—badly copied, re- or de-contextualized, cropped, simplified, edited, decorated, and woven pixelated on digital looms—before I even lay hands on them. Just like the rest of our history, they have already been massively interfered with.12
Process Directed
I draw a drawing until I am shocked by what the drawing tells me and I find myself in a place where I have never been before. I begin a drawing not knowing where I am going and end it when the drawing tells me that I have gotten there.13
Alfred DeCredico, 1993
Appropriation, interference, subversion and process direction are the cornerstones of Marks’ collage-based drawing aesthetic, but her proclivity is ever expansive in her pursuit of as fluid a drawing process as possible. Marks’ disposition as a visual artist is to submit to “process direction” and to “serve the process.” Intuition is her primary guide. For Marks, drawing is about seeing—not the kind of seeing that happens with open eyes, but the kind that occurs with an open, unassuming, and playful mind that is present in the moment of creation. Marks purges intention in order to become a conduit of process. As she works to guide fabric scraps under the sewing needle, the tug of the machine is also a guide, pulling her attention to unexpected things. And as the composite pieces are stitched into a unified whole, visible for the first time at her fingertips, the reveal is suggestive of the next addition to be sewn. A few key drawings included in China Marks—Nowhere Everywhere shed light on the importance of this aspect of her work—see: About the Book (page 74), Serving the Process (page 75) and My First Text (page 96).
Marks likens the zigzag stitch of her industrial sewing machines to “a mechanized artist’s scribble.”14 With the mechanized scribble, she begins a narrative that is well suited for whatever combinations of materials and characters are at hand. She begins a work without expectations, and she welcomes the intuitive connections and associations that naturally arise as she works. While Marks initially selects fragments, she aims to not over-think her choices and simply “trusts the process.” Being present in the moment and watching the thing unfold as it moves under the fingertips allows for the possibilities of unknowing to guide the outcome. Another Thompson Gallery artist that championed seeing is the late Alfred DeCredico, who described intuition in the following passage from his statement on drawing:
Serious drawing is, by necessity, about the abandonment of will and ego as much as it is about embracing them. It is about contending with the precarious balance that must exist between these aspects of the persona and the inventiveness of the conscious mind.15